Mars sales increased by 11% in Spain thanks to our gamifications.

Mars Iberia is part of the American global manufacturer Mars Incorporated, one of the biggest family-owned food companies of the world, which has net sales of more than 33 billion US dollars per year and counts with more than 80,000 associates around the world. This company operates in five business segments (confectionery, chocolate, food, drinks, petcare, and symbioscience) and it is the owner of some of the most well-known brands in the world: M&M’s®, Mars®, Sugus®, Orbit®, Pedigree® or Whiskas®.

Mars Iberia came to Playmotiv looking for an efficient and innovative way to encourage motivation and productivity of their employees and associates.

The mutuality of benefits is one of The Five Principles that constitute the corporate identity of Mars. Connected to this idea, Mars believes that mutual benefit is a shared benefit, and a shared benefit will endure. This is basically the core idea of any successful gamification: turning daily work into a gratifying experience will help employees to bring out the best in them, but it also will help to get the best version of the company in a sustainable way in the long term.

Gamification and storytelling to turn work into fun

Gamification transforms daily tasks into games able to generate positive emotions in participants’ minds. This can only be achieved if the stories really connect with the interests of the players. This is why, in Playmotiv, we analyse in detail the features of the potential players before suggesting the most suitable game themes for them. Some of the factors that we take into account to create the perfect story for our clients are gender, age, and type of professional activity.

We adapt the storytelling of each gamification to our clients and the real interests of our potential players.

For example, Mars associates were mostly men who spent a lot of time driving, so we created a gamification for this specific profile. We offered them a four-wheel adventure: The Great Rally of the Six Continents. Players could recognise their daily work in the game because storytelling was adapted to them, so they could imagine themselves driving the rally cars because the game was directly connected with their personal interests.

Success is measured by figures

The game lasted three months and it obtained excellent results. Total sales increased by 6 percentage points, from 5.5% in August to 11% during the months of the gamification. These results were different from the ones obtained by other subsidiaries that were not gamified in the same period. Their results remained measured and stable, sales increased between 1.7% and 1.9%.

Playmotiv gamification: a satisfaction story “made in Barcelona”

We believe that players’ and our clients’ satisfaction go hand in hand because only enjoyable games will have a positive impact on the results of the companies. For example, the active participation rate of Mars players was over 70% (72% of the 230 associates that took part in the gamification received a reward), and the game was rated with 9.6 points out of 10.­
However, the most valuable indicator for us is loyalty. After its first experience with Playmotiv, Mars Iberia has continued to choose us for its gamifications, and that is certainly the best recognition we could receive.

As a proof of our mutual success, we want to share this video where the Business Partner Manager of Mars Iberia, Lluis Costa, talks about their gamification experience with us. 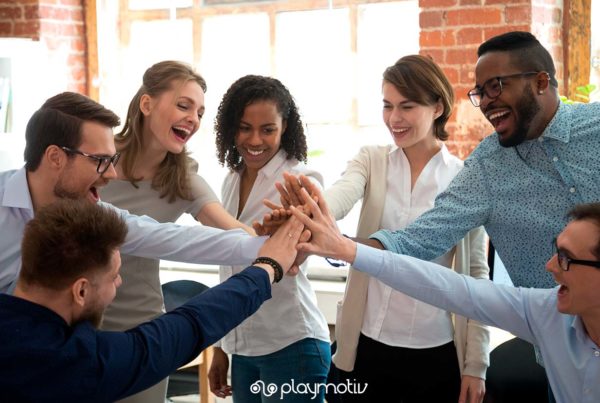 Team Management: Do you want them to give it all? We give you 4 ideas how to make them do it happy

How to motivate employees in times of Coronavirus